The GHOST vulnerability is a serious weakness in the Linux glibc library. It might allows attackers to remotely take complete control of the victim system without having any prior knowledge of system credentials. CVE-2015-0235 has been assigned to this issue.

For further information about the vulnerability, you can refer to the following url:

To verify if your Linux server is affected by the Ghost Vulnerability, please run the following commands :

Once execute, the output will clearly state(“Vulnerable” or “Not Vulnerable”) if your server is affected by the vulnerability.

If your server is found vulnerable, then run the following command as root on your respective distribution.

After again try the GHOST to check the same. 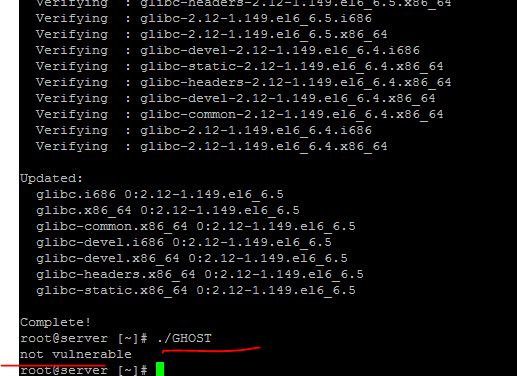 The GHOST vulnerability is a serious weakness in the Linux glibc library. It allows attackers to remotely take complete control of the victim system without having any prior knowledge of system credentials. CVE-2015-0235 has been assigned to this issue.

Qualys security researchers discovered this bug and worked closely with Linux distribution vendors. And as a result of that we are releasing this advisory today as a co-ordinated effort, and patches for all distribution are available January 27, 2015.

What is glibc?
The GNU C Library or glibc is an implementation of the standard C library and a core part of the Linux operating system. Without this library a Linux system will not function.

What is the vulnerability?
During a code audit Qualys researchers discovered a buffer overflow in the __nss_hostname_digits_dots() function of glibc. This bug can be triggered both locally and remotely via all the gethostbyname*() functions. Applications have access to the DNS resolver primarily through the gethostbyname*() set of functions. These functions convert a hostname into an IP address.

What is the risk?

There is a remote code execution risk due to this vulnerability. An attacker who exploits this issue can gain complete control of the compromised system.

Is the risk real?
During our testing, we developed a proof-of-concept in which we send a specially created e-mail to a mail server and can get a remote shell to the Linux machine. This bypasses all existing protections (like ASLR, PIE and NX) on both 32-bit and 64-bit systems.

Is this a design flaw?
No. This is an implementation problem in the affected versions of the software.

What versions and operating systems are affected?
The first vulnerable version of the GNU C Library affected by this is glibc-2.2, released on November 10, 2000. We identified a number of factors that mitigate the impact of this bug. In particular, we discovered that it was fixed on May 21, 2013 (between the releases of glibc-2.17 and glibc-2.18). Unfortunately, it was not recognized as a security threat; as a result, most stable and long-term-support distributions were left exposed including Debian 7 (wheezy), Red Hat Enterprise Linux 6 & 7, CentOS 6 & 7, Ubuntu 12.04, for example.

Where can I download the exploit?
We want to give everyone enough time to patch. According to our data once the vulnerability has reached its half-life we will release the exploit. Half-life is the time interval measuring a reduction of a vulnerability’s occurrence by half. Over time, this metric shows how successful efforts have been to eradicate vulnerability. A shorter half-life indicates faster remediation. Half-life was originally coined by Qualys in the Laws of Vulnerability.

Qualys customers can detect GHOST by scanning with the Qualys Vulnerability Management (VM) cloud solution as QID 123191. This means that Qualys customers can get reports detailing their enterprise-wide exposure during their next scanning cycle, which allows them to get visibility into the impact within their organization and efficiently track the remediation progress of this serious vulnerability.